When Motorfinity’s Account Manager, Jayne Kerins, proudly related news of her partner Paul’s exploits for his favourite Army Benevolent Fund, Cateran, Team Motorfinity joined forces to sponsor Paul as he set off on his most recent challenge.

Long-time Army pals Paul Christie and Dave Page are big supporters of this veterans’ charity and every year they embark on the Cateran Yomp, (a military term for a long-distance march). It is the biggest, toughest event of its kind. Taking place in the foothills of the Cairngorm Mountains in Scotland, teams battle through 54 miles in 24 hours in the gold event across the rugged terrain of the Scottish wilderness.

“When I read the description of the challenge, I thought, ‘How hard can this be?’
It turns out very hard! Blisters, hot weather, torrential rain, fatigue, both mental and physical, and more blisters! I'm never doing that again! That was 5 years ago. Fast forward 5 years to the present day and I have just completed this year’s Cateran Yomp again…"
“As it says in the description, the yomp is a hard endurance event, and it takes you through some breath-taking scenery. It is an exceptionally well-run event where the organisers do a wonderful job and all the money raised goes to the Army Benevolent Fund. "
“ABF The Soldiers’ Charity is the Army’s national charity. They are there for soldiers, former soldiers, and their families for life. "

From helping wounded soldiers to adapt to life after service, to assisting elderly veterans to keep their independence, they are there for the Army family when they are needed.

A worthwhile cause that I have always supported in any fundraising I have done.

Of course, not wanting to do things by halves, Paul and Dave took on the 54-mile gold challenge and set off on 11 September 2021 at 7.00.am and finished the gruelling course at 3.30.am the next day. The latter part of the circuit was in total darkness over rough terrain, but the friends battled through encouraged by one another. Paul told Motorfinity about their special camaraderie:

“Dave and I joined the army on the same day in January 1989 and became firm friends almost straight away. I was even his best man when he got married.
“We have kept in contact and visited each other over the years, and, by complete chance, we now only live 1 mile away from each other.
“We have always been very competitive with each other in every sport we have ever played. We still regularly play squash and walk in the hills of Derbyshire. “During this year’s yomp, we both had down moments. Dave had badly blistered feet and I was fatigued. We kept going and egged each other on, mostly with insults and name-calling but together we pulled through to complete it, raising over £1000 between us.
“Thank you to Dan and Dean and Team Motorfinity for all their donations and kindly supplying our t-shirts.”

Next year’s Cateran Yomp will be held on 4/5 June 2022. Will Paul and Dave be signing up? Team Motorfinity are putting money on it!

This year, 5,000 people tool part raising over £400,000 for the charity. You can sign up with friends, family, and colleagues to experience an unforgettable weekend whilst raising money for soldiers, veterans, and their families. Whichever distance you choose, you will get to test both your physical and mental limits whilst trekking through some truly breath-taking scenery.

We’re sure Paul and Dave will be there – will you?! 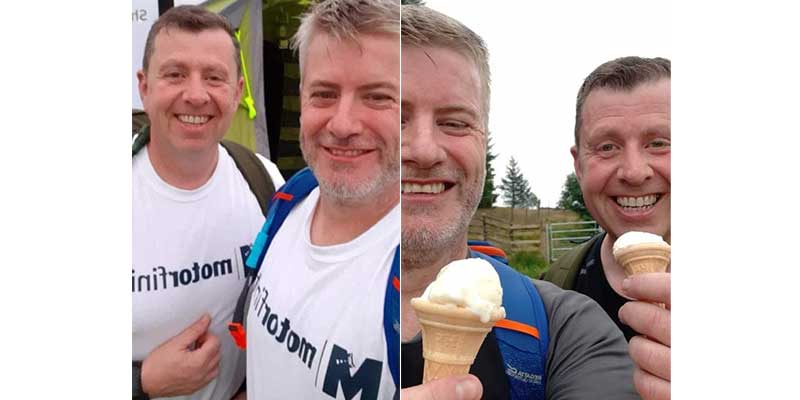